By whatever name you call it: Fiberboard, Beaver board, sound-deadening board, CelotexTM, or HomasoteTM, this material seems to be making a comeback with potential acoustical uses. But before you decide to add it to your next project, you should know that this compressed fiberboard does not add any positive acoustical effects in most constructions. We have found that, with a couple of exceptions, replacing the fiberboard with a gypsum board product or plywood usually results in a higher-rated acoustical construction.

Let’s start out by examining wall assemblies. The original sound tests using fiberboard were done under a now-obsolete 1967 standard. In this test, the fiberboard and gypsum board were glued to the framing studs. An analysis of the test results shows that the fiberboard provided some (but not all) of the benefits resilient channels are known for. This installation method is the main weakness with that acoustic test. Most building inspectors in California will not allow you to glue fiberboard to the wall and then glue gypsum board over it. In fact, when was the last time you built a wall by simply gluing it together? Some type of mechanical connection is required to bond the layers, even when resilient channels are used. This is also important to consider from a longevity point of view. But as with resilient channels, mechanical connections need to be carefully installed to avoid compromising the acoustic benefits of the assembly.

When attaching the gypsum board to the resilient channel, any screws which accidentally connect with the framing members will short-circuit the assembly by locking the resilient channel in place. Once this happens, all flexibility is lost and the channel is worthless. Likewise, if we screw the gypsum board into the framing member behind the fiberboard layer, then the resiliency found in that original glue-up test will be lost. On the other hand, if you actually plan on driving fasteners through the board layers and into the framing, you would be much better off simply replacing the supporting fiberboard with another layer of gypsum product. 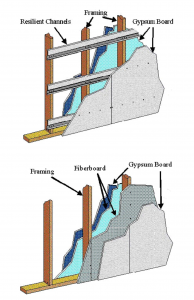 A thicker version of a fiberboard panel is sometimes used for a subflooring system in wood frame constructions. While its fibrous composition might help reduce some footfall noise heard between stacked units, it is too lightweight to act as a barrier material in the same manner that a plywood subfloor with lightweight concrete or gypcrete would. In these cases, the advantage of using fiberboard is offset by the limited number of facilities where it will make a difference.

Using fiberboard as a carpet underlayment also provides mixed results. We have found that applying fiberboard on top of a floor system provides no additional sound isolation from unit to unit. If the carpet is thick and well-padded, the footfall noise or impact isolation of a floor/ceiling assembly is not significantly affected. However, as an underlayment for thin or lightweight carpets without pads, the HomasoteTM product would help reduce impact noise into the room below.
The Care and Feeding of Fiberboard

One important precaution to observe with fiberboard is keeping the material dry during construction. We were called upon to provide expert testimony for a project where a contractor had substituted (without the architect’s permission) fiberboard for a floor design system of plywood and gypcrete. During a rainstorm the floor system was allowed to get wet, causing the fiberboard to expand and buckle.

In the long run, the pending lawsuit claimed acoustical, structural, and numerous additional damages because the owner was not happy with the finished product. Needless to say, had the original design detail of a plywood subfloor with a gypcrete system been utilized, much of the unevenness caused by water damage could have been avoided. Also, certain acoustical problems in the facility might have been avoided as well.

Don’t get us wrong; as part of a construction crew during high school and college many of the first buildings we worked on in Michigan used fiberboard as an infill underneath the exterior sheeting. In this geographical location shear plywood is not required along the entire exterior wall — only at the corner. While fiberboard can be useful for replacing plywood or gypsum board in some assemblies, we feel that its true acoustical values are extremely limited. This is basically because it is too rigid to act as a resilient connector, and not absorptive enough to substitute for an absorber such as batt insulation. 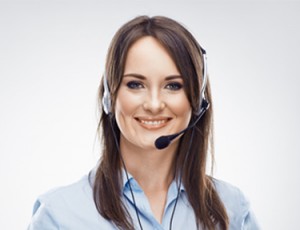